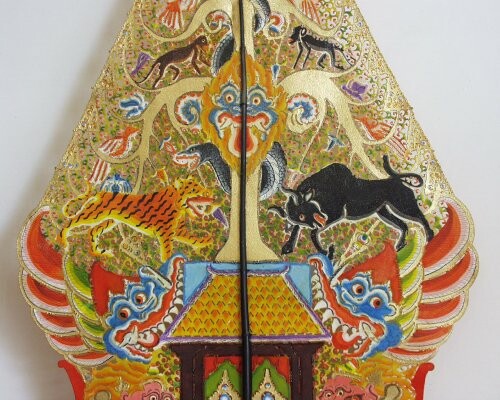 A gunungan is a symmetrical-shaped figure of translucent parchment made of dried, firm beef skin, whose outline is pointed in Java and more rounded in Bali. In a wayang performance, the gunungan is the first to appear on the screen and the last to appear before the end

Gunungan is a symbol of life, so every image in it symbolizes the whole universe and its contents ranging from humans to animals and forests, and equipment. Gunungan terms of pentagon shape, pentagon has a meaning that was five times that must be done by religion as for the form of mountains tapering to the top it symbolizes that human life is to the one above that is God Almighty.

In Kayon there are carvings or drawings that include:

Bull = symbol of the spirit, earth elements, with the nature of power lust aluamah

Dragon = symbol of the Spirit, the water element to the nature of the power of lust sufiah

Eagle = symbol of the Spirit, air elements to the nature of power lust Muthmainah.

Picture a giant crater condrodimuka used as a symbol, as for when connected with human life in the world as a symbol or a message to the soul who sins will be put into hell full of torment.

While the forms of philosophy is: the form of mountains of the left ventricle itself resembles a porch that is in our bodies, it may have a meaning if we have to keep whatever is in our hearts only to the creator. And a more severe form is in terms of the precision with “mustoko” above the mosque there are many in our country. it is symbolic of sipembuat for us to keep our hearts secar straight (like trees) to the mosque / religious / god.